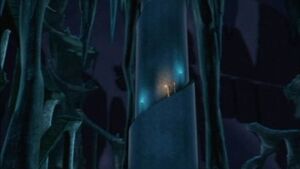 The catacombs constitute a large underground collection of buildings, chambers, and passageways. How far the catacombs stretch and how deep they go is unknown, but at least a portion of it is located in the USA, specifically under Monster High, under the nearby residence areas which include the human town New Salem, and there's a tunnel that reaches the ocean. The catacombs are terrae nullius, as the only known creatures occupying it are not of the sapient kind. The two people who are most experienced with the catacombs are Operetta and Mr. Hackington, who spend large portions of their free time there.

The catacombs essentially are the non-watery equivalent of the Deep End. The two don't appear to be connected but for that a lair within the catacombs, where a dragon resides that regulates the school's pool's temperature, is connected to the pool that houses the entrance to the Deep End.

No one knows who built the catacombs, or when, or why so much knowledge of them has been lost. The catacombs were already a mystery a few centuries ago, when Frankie Stein's father set up a laboratory around the time that thirteen students went missing. Headline: Frankenstein's Letter to the Editor And about a century ago, Robecca Steam's father joined an expedition into the catacombs that ended up missing too. Robecca Steam's Between Classes diary

The catacombs are largely dangerous, but they are safe to enter as long as people stay within the known portions of the catacombs. Since the area belongs to no one, Monster High has claimed portions nearby the school for facilities the campus doesn't have the room for, such as a train station and its own Skultimate Roller Maze course. As well, Mr. Hackington organizes Creature Spotting field trips into unclaimed portions of the catacombs.[1] Of the flora and fauna to be found there are scargoyles[2] and monster thistle.[3] Dragons and bone elementals are known to occupy the loneliest parts of the catacombs, which means they're only encountered if a full expedition into the catacombs is organized.[4]

Though they aren't known to enter them regularly, the citizens of New Salem are familiar with the catacombs, or at least the portion under the town.[2][5] This area borders on the monsters' terrain, but the two groups rarely cross over into each other's.

Though the catacombs are an area to be treated lightly where disappearances easily happen and still new areas are discovered with no suggestion of the place being fully mapped any time soon, Robecca Steam's Between Classes diary the places is the most popular location for the Monster High student body to hold parties, closely followed by Monster High itself and at a distance by the De Nile residence. 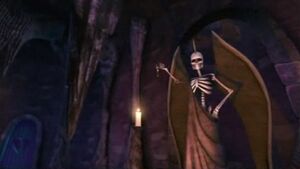 Since most of the catacombs are forgotten terrain, the layout is only partially known and what percentage that part represents is a mystery. There are both walkways and waterways, including left behind boats, to journey through the catacombs. Areas in the catacombs that are not or no longer a secret include:

The Catacombs' archways and stairway

Top of the Pit of Horror along with Draculaura, Clawdeen and Lagoona (from "Fur Will Fly")

Opera house ("Phantom of the Opry" & "Monster Mashionals Part 1" seen with three seats on the top and an organ.)

Concert hall ("Why Do Ghouls Fall in Love?")

Retrieved from "https://monsterhigh.fandom.com/wiki/Catacombs?oldid=345083"
Community content is available under CC-BY-SA unless otherwise noted.