I can't have a pet because I don't think I could stand being constantly asked, Oh how cute…was this a fan of yours?

Casta Fierce is a 2014-introduced and all-around character. She is a witch, specifically the daughter of Circe, and the lead singer of The Spells. Aside from Casta, The Spells consist of three girls who are uniquely immune to Casta's magic. Like her mother, Casta can turn anyone into any animal, but she has limited control over her powers. One misspoken word or unfortunately phrased sentence is enough to turn anyone hearing it into the matching animal. This has put a damper on her singing career, but Casta and her band keep making music as they look for solutions. Casta is a close friend of Catty Noir, a colleague of hers.

She is voiced by Erin Fitzgerald in the English dub in the series.

Casta has long black hair with purple and orange highlights on her fringe and green skin. She also has a beauty mark and a painted yellow lightning bolt on her face. Her outfit consists of a sparkly dress that is purple and orange, cascading into a flowing orange and black net with a black belt. She has spiked purple boots, a fishnet arm warmer, a purple broom with orange ribbons, and a purple microphone. Her hair may sometimes be tied up in a ponytail.

Casta is shown to care about her fans, willing to fulfil a request asked of her, by her fans. She is also shown to get embarrassed when she's on stage and says a spell that on accident turns her fans in the crowd into animals. Causing her to have a bit of stage fright as that's all she can think about, but after Toralei Stripe makes a fool of herself, it helps Casta take her mind off things allowing her to preform again.

Casta Fierce is the daughter of Circe the goddess of magic. Like her mother she can also turn people and other monsters into animals. Casta and her mother seem very close as her mother watched her preform at Monster High, and in a flashback to a younger Casta, she is with her mother.

Casta is Spelldon's older sister, he has been traveling with her at Monster High.

Casta is a close friend of Catty Noir, a fellow but younger singer who has put her career on pause to return to a regular life. Supposedly, Casta also is close with her fellow band members. She is also best friends with Operetta.

Casta's mother, Circe, is a well-known sorceress from Greco-Roman Mythology (although not the actual Goddess of magic, that would be Hekate, who in some stories is Circe's mother). Circe is best known for her role in The Odyssey, where she lives on the isolated island of Aeaea, where she uses potions to turn the men who visit her into livestock like pigs. She comes to fall in love with the hero Ulysses/Odysseus and even teaches him how to contact the dead in the Underworld. 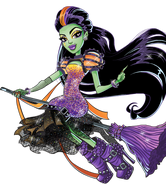 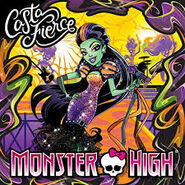