"Captain Penny is my mechanical penguin. Working wings are unnecessary when one is equipped with a rocket pack."

Captain Penny is a copper-colored robot penguin with an orange beak and white-encircled green eyes, and many rivets.

She is in frequent need of an oil change and some students call her "Grumpy Penny". 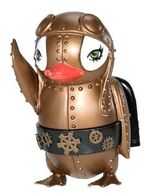 'Between Classes' Captain Penny stands with her right wing up as if in greeting.

Retrieved from "https://monsterhigh.fandom.com/wiki/Captain_Penny?oldid=343190"
Community content is available under CC-BY-SA unless otherwise noted.