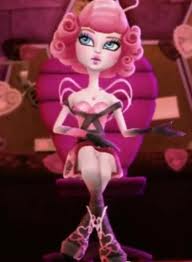 C.A. Cupid debuted in the cartoon series in the Volume 3 TV special "Why Do Ghouls Fall in Love?", which premiered on February 12, 2012. She is voiced by Erin Fitzgerald in the English version of the cartoon.

Cupid attends the Boo Year's Eve party in the catacombs. Boo Year's Eve Cupid, Abbey, and Frankie are grouped together for an assignment on the four seasons. She and Abbey disagree about which season is the best, until Frankie breaks the tie with a suggestion that all seasons are equally important. Their presentation is awarded with an A. The Ghoulest Season

As the host of the popular On the Air with C.A. Cupid radio show in which she answers questions about love, Cupid is the first Frankie Stein and co. turn to when they find that Draculaura has been put under a malicious love spell by Kieran Valentine. Cupid agrees to help out, noting that only her crossbow can counter the spell. The group plans to shoot Draculaura and make sure the first she sees after that is Clawd. The challenge unexpectedly becomes bigger when Cupid actually takes aim at Draculaura and notes how the spell is much more powerful than she had thought. As such, she uses two arrows to try and break it, but at the moment of firing, Toralei thwarts her by throwing a paper plane to her head.

The arrows miss Draculaura, but end up hitting Clawd and Cupid herself, causing them to fall in love with each other. Now deeply in love with Clawd, Cupid refuses to tell the others how to break the spell on them. She also bails on her radio host duties, but Abbey Bominable fills in for her. The girls come up with a plan to throw Draculaura a birthday party so that she, Valentine, Clawd, and Cupid will be in one room together, then smash Cupid's crossbow in hopes it will lift the spell on her and Clawd so they can help lift the spell on Draculaura again. This works, and as the party continues as a genuine birthday party, Cupid and Abbey team up to host a special edition of On the Air with C.A. Cupid on the scene together. Why Do Ghouls Fall in Love?

Cupid attends the Spring Break carnival, where she pays a visit to Bloodgood's stand to get her future told. Bloodgood assures her that if she does all her homework, she'll get an A. A week or so later, she witnesses a battle of wills between Bartleby Farnum versus Kipling and Andy Beast and in the aftermath joins the rest of the student body on Skull Shores for an extended Spring Break. Escape From Skull Shores

C.A. Cupid is one of the supporters of the new SKRM team. Friday Night Frights

When the tensions between Monster High and New Salem High are at a high, Cupid is one of the students who stay on the sidelines. She does attend the party of peace afterwards. Ghouls Rule

C.A. Cupid is among the audience of Clawdeen Wolf's fashion show that earns her and her friends a trip to Scaris. Later, Clawd Wolf asks Cupid for advice on his uneasiness regarding Draculaura's stay in Scaris, the City of Love, without him. Cupid tells Clawd to trust Draculaura, which Clawd enthusiastically misinterprets as that he has to go to Scaris himself pronto. Scaris: City of Frights 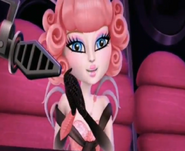 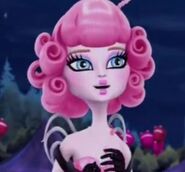 Add a photo to this gallery
Retrieved from "https://monsterhigh.fandom.com/wiki/C.A._Cupid/cartoon?oldid=344867"
Community content is available under CC-BY-SA unless otherwise noted.