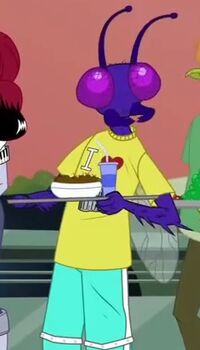 Buzz Wingman is a 2011-introduced and cartoon-only character. He is an anthropomorphic fly and a student at Monster High. He loves to dig through trash cans.

Like it says on his shirt he loves trash, as in many webisodes, he digs though trash cans.

Buzz is a purple humanoid fly. He has a fly like head, and fly bug like wings on his back. He usually has on a yellow shirt that says "I love Trash", just with a red heart rather then the word love. And he usually has pale blue and white pants on.

He waits in line for Cleo to sign his copy of the fearbook. Fear the Book Daydream of the Dead Nefera Again Hiss-teria Here Comes Treble

Buzz is modelled after "The Fly" from the 1958 monster movie of the same name.  In that movie, a Quebecois scientist named Dr. André DeLambre creates a teleporting machine which he uses on himself only for a fly to go through with him.  The result of this mixes the atoms of the scientist and the fly resulting in Dr. DeLambre turning into an insect/human hybrid with the head and arm of a fly and slowly become more and more animal-like.

Retrieved from "https://monsterhigh.fandom.com/wiki/Buzz_Wingman?oldid=345603"
Community content is available under CC-BY-SA unless otherwise noted.