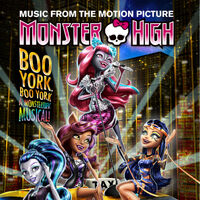 It includes eight original songs that feature on the TV Special and the two theme songs to Monster High. It was released September 25, 2015.

Retrieved from "https://monsterhigh.fandom.com/wiki/Boo_York,_Boo_York_(soundtrack)?oldid=349190"
Community content is available under CC-BY-SA unless otherwise noted.