Billy is a Monster High book-only character whose "freaky flaw" is that he's invisible.

Billy was introduced as a sort of practical jokester, using his invisibility to his advantage. However, once his character developed a bit more, he was seen as charming, going to great lengths for his friends.

Billy Phaidin is invisible. He uses fake tanner, hair dye, sunglasses, and the like to appear visible. He wears a plain t-shirt, jeans, and running shoes. 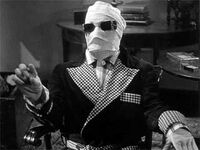 Billy Phaidin is based on the titular scientist from the science fiction novella The Invisible Man by H.G. Wells, and the 1933 film adaption by Universal Studios.

The invisible man in the story is called Dr. Griffin (Dr. Jack Griffin in the film), and he used himself as a guinea pig in an experiment to alter the refractive index of living bodies to that of air so that light would no longer be absorbed or reflected and the subjects, therefore, would be invisible. It didn't take him long to abuse his power, eventually resulting in his demise. Upon death, his body became visible again.

Billy is good friends with Candace Carver, as she acts as an advisor to him, and even volunteered to make him "visible". He is also best friends with Frankie Stein, despite their complex romantic past.

Billy was originally interested in Frankie Stein, but stopped when he realized she didn't and wouldn't return the feelings. In Where There's a Wolf, There's a Way, Billy expressed interest in Spectra Vondergeist, a girl he'd known since eighth grade. As of Back and Deader Than Ever, the two are dating.

Frankie first meets Billy at a RAD meeting, where he shows his support for her cause. He also saves her by carrying her out of the school and gives her a rose.

Book 2 - The Ghoul Next Door

Billy plays a key role by dressing up like Frankie to get everyone off her trail, but that failed due to Brett's bad timing. He also helps found NUDI (Normies Uncool with Discriminating Idiots).

Candace decides to use fake tanner, hair dye, etc., to make Billy "visible". Using his new visible persona, he takes Frankie out on a date, thinking she was over Brett after the documentary incident had him labeled as a villain. However, Billy found out the hard way that Frankie still had feelings for him. Billy did the right thing and broke it off with Frankie in a polite manner. All was not lost, though, as Billy met Spectra at Clawdeen's Sassy Sixteen party, and the two started flirting.

Book 4 - Back and Deader Than Ever

Billy and Spectra officially become a couple, though Frankie doesn't seem too happy about it. Not because of jealousy though, she's worried that Spectra's talent for mixed information and gossip will get Billy hurt. During the elections for the school representatives for the Teau'Dally, he switches the ballots, not wanting Cleo to win, and declares Frankie the winner, which she was not happy about. He sincerely apologizes, and the two share a (friendly) moment.