Beetlejuice has light pale skin and green hair. She wears a white and black pinstriped suit that shreds at the tips of the coat and black boots. Her accessories include a black and white striped headband and earrings. 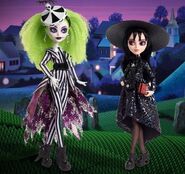