Batsy Claro is an exchange student from Costa Shrieka. She is the daughter of the White Vampire Bat and is enamored with anything to do with nature and is a rainforest activist, protector of her jungle back in Costa Shrieka, where she lived in an upside down treehouse/cave and worked as a tour guide, giving tours of her jungle to tourists. Eventually, she decided to give the city life a chance and study at Monster High, when she came across with its Exchange Program, and is now adapting to being a tourist herself.

In English, she is voiced by Cristina Milizia.

Batsy is aware that she isn't exactly the nicest, the softest or the most welcoming girl in the world, however, growing in a jungle has made her just as prone to it as she is aware of it. Her life has taught her to keep attention to her surroundings, making her harsh and firm (and with little patience to those who don't know any better, and with inexperience make mistakes, which reflects in her tour guide agenda). While not mean-spirited, she is known to yell first and apologize later. Fierce, protective and fearless, all these traits together with her agility, speed and athletic skills, she gathers the perfect attributes to sustain herself in a jungle, which she prefers.

Brought up in the wild and an animal creature herself, she is an extreme nature lover, and can get extremely carried away with this, and will almost always confront the threats frontally. Brave, determined and strategic, she can sometimes jump into conclusions, and can be taken as distant and unapproachable, due to the mistrust she feels for anyone that messes with the wildlife, however, once you get to know her, she is a kind hearted girl, despite her initial despise to new experiences and her highly opinionated personality.

Batsy has platinum curly hair with green and blonde highlights, though her eyebrows are green, suggesting that's her natural color. She has sparkly pale pink skin and dark brown eyes, pointy ears, a bat-like nose and fangs. She has large wings, with intricate designs similar to bones and jagged cuts.

She prefers wearing "rainforest chic" outfits, with lots of green, white and yellow, and she adores to embrace her culture with leaf patterns and other jungle motifs.

As a vampire bat, Batsy has shown she possesses characteristics similar to those of a bat:

Little is known about Batsy's family, though her diary confirms the existence of a mother and a father who live with her in their cave.

Batsy's best friend, at Monster High, is Venus McFlytrap, a fellow nature enthusiast, and the two bond over plants, animals, and ways to save them from the dangers imposed by normies and monsters, despite their rough meet.

Jane Boolittle and Batsy are pretty tight too, seeing how both are jungle ghouls who moved into the city, although Jane is rather shy.

Batsy is in a relationship back in Costa Shrieka, a relationship she was about to put an end to when she decided to move to the Boonighted States, where the two agreed on giving a try to a long distance relationship. The two love each other very much, and one can argue it is where Batsy reveals her softest spot.

In "Frankie Stein and the New Ghoul at School", Batsy is paired with Venus McFlytrap, Ghoulia Yelps, and Kjersti Trollson, to find Zappit. 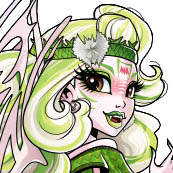 Add a photo to this gallery
Retrieved from "https://monsterhigh.fandom.com/wiki/Batsy_Claro?oldid=345836"
Community content is available under CC-BY-SA unless otherwise noted.