Barker Wolf is a 2017-introduced and all-around character. He made his first animated appearance in Adventures of the Ghoul Squad: Howliday Edition. He's the brother of Clawdeen Wolf.

He has pale brown fur, and spiky hair, which is dark pink in Adventures of the Ghoul Squad, while his doll version has gold hair with light blue stripes. He has yellowish green eyes. In the TV special, he wears a black t-shirt with blue claw marks on it, purple shorts, and yellow and red running shoes. As a doll, he wears a black shirt with a blue and purple pattern, blue shorts, and is barefoot.

Barker possesses most of the same abilities as other Werewolves. 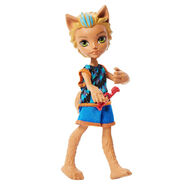 Add a photo to this gallery
Retrieved from "https://monsterhigh.fandom.com/wiki/Barker_Wolf?oldid=345097"
Community content is available under CC-BY-SA unless otherwise noted.