Volume 1, Episode 12: The new sugar eyeballs in the school vending machine have a scary side effect. Find out about the icky condition sweeping Monster High!

Frankie just bought herself a bag of the new sugar eyeballs in the school vending machine. Pleased with their taste, she tosses one to Slo Mo to try. Having gone through the entire bag, she checks her face in her compact mirror. To her horror, she has a pimple. To her even greater horror, Cleo sees it too and takes a photo with her phone. After some teasing, she emails it to everyone in Monster High, causing Frankie to run into the bathroom to avoid the laughter. Checking her face once more in the bathroom mirrors, Frankie screams. Draculaura, Clawdeen, and Lagoona arrive and ask her if she ate anything unusual. Frankie tells them about the sugar eyeballs and they gasp, knowing those are cursed and the source of Frankie's blemish. As they wonder how to fix the situation, Ghoulia appears and pokes the pimple. The girls are disgusted, so Ghoulia hands Frankie a paper bag with drawn-on face to hide Frankie's head under.

Later in the creepateria, Frankie can't hear anything under the bag. When Lagoona mentions how cute Gil is, Draculaura has to repeat it for Frankie and does so rather loudly. Frankie tires of the situation and removes the bag, at which point she sees that her pimple has disappeared. Ghoulia shows them the tube of zit removal cream she had put on Frankie when she poked her: Fearasil. Frankie thanks her friends for being so supportive.

A few tables away, Cleo screams as she sees her own face covered in pimples. Ghoulia puts a paper bag over her head too and Frankie asks if she happens to have tried any of the new sugar eyeballs. Like Frankie before, Cleo can't hear well and asks the question to be repeated. 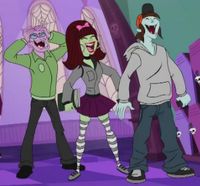 Retrieved from "https://monsterhigh.fandom.com/wiki/Bad_Zituation?oldid=312861"
Community content is available under CC-BY-SA unless otherwise noted.