I've never found one that has been able to keep pace with me.

Avea Trotter (spelled Avia Trotter in the Junior Novels books, and called Avia Trotter on a list of characters credits from Haunted[1] and pronounced Eh-vee-uh Trotter[2] in English) is a 2014-introduced and all-around character. She is a hybrid, the child of a harpy and a centaur, and a student at Monster High. In English, her name is pronounced as A-vee-uh, with the sound of the actual long letter A, not the "ah" sound or "aw" sound. Frankie, however pronounces it as ä-V-uh or ˈä-vee-uh in Haunted in the flashback sequence and later on in the film of the real thing.

She is voiced in English by Haviland Stillwell[1].

Avea is a stubborn, opinionated ghoul who tends to take charge, and can be very blunt toward others. Like her longtime hybrid friends—Bonita, Neighthan, and Sirena—, Avea has a history of going from school to school because she had trouble fitting in with other students. This has made her somewhat guarded and distrustful toward others. But after her adventure with Frankie and the other ghoulfriends in Freaky Fusion, she has since learned to open up to others, and feels more accepted at Monster High than anywhere else. She is also seen as a leader of her friends, although this is not specified. Her favorite activity is running as fast as she can.

Avea Trotter has pale purple skin, but it is darker on the horse part of her body. She also has feathery wings that fade from black to turquoise, and her blue eyes have bold pink feathers surrounding them. Both her head hair, done in a ponytail, and tail hair are blue. She has horse ears and has bird feathers on her wrists. Her main outfit features a black top hat with red trim. She wears black gloves. She has on an outfit that resembles a equestrian's uniform, with blue ruffles along the collar and bottom. Around the waist of the top is a black belt with strands hanging off it. She also has pale purple skull tattoos on her flank.

Avea has the abilities of a harpy and a centaur.

As a hybrid, Avea's parents are two completely different monsters. Her father is a centaur scientist who specializes in researching monster remedies and medicine, and her mother is a harpy who is his research assistant. 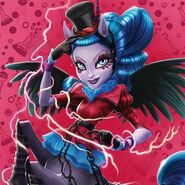 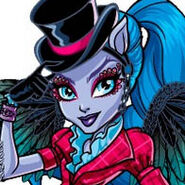 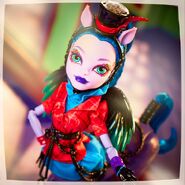 Retrieved from "https://monsterhigh.fandom.com/wiki/Avea_Trotter?oldid=345388"
Community content is available under CC-BY-SA unless otherwise noted.