Click here to go to the press coverage archive

Dawn of the Dance - Clawdeen Wolf 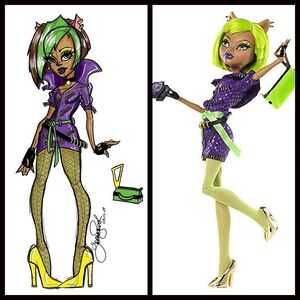 Garrett Sander: I want to do something to post about some of my favorite dolls I got to design, so each Monday I'll be posting the original design alongside the final doll! For the first MHMonday it's Dawn of the Dance Clawdeen Wolf! I loved designing this line! It was inspired by the 80s mixing bright neon colors with metallic shine. Clawdeen is rocking a purple zipper dress with oversized high collar, neon fishnet tights and gold heels with zipper opening detail. For the final doll we went with more of that totally clawsome green hair. It was always so fun to give Clawdeen different hair styles and colors.

Garrett Sander: It's MHMonday!! It was so fun getting to create Catty Noir. Her first doll for Friday the 13th showcased her in her pop ghoul look. With her New Scaremester design I wanted to carry across the fun of a pop star with an everyday going to class look! She has her silver dress with shattered allover print. Shiny pink tights with white lace, pink gloves with matching lace detail. And pink shoes with shattered mirror heels. In the original design the show colors are revered, but the pink top with silver heel looked better once I saw it in 3D! She also has a quilted cat shaped purse for all her required back to school materials! Fun Fact: her dress was originally supposed to be a foil dot print fabric, but something went wrong with the order for it (I forgot the exact reason lol) so last minute we had to find a new fabric to use. The amazing team in Hong Kong and at the plant located the silver weave the final doll came in! Which was even more perfect and gave a better effect and held the structure of the dress better. So sometimes what seems like an unlucky event can become just what you need, just like our resident Black Catgirl

Extra: [I didn't design] all of them. I created Catty, but depending on what line she was in other designers designed looks for her too! I did her original Friday the 13th look, New Scaremester, Boo York, Boo York, and Fierce Rockers looks! Oh, and I should clarify I did Catty's Frightseers look for Boo York, Boo York.

Garrett Sander: It's MHMonday!! And here's everyone's favorite zombie ghoul Ghoulia Yelps!! And her pet owl Sir Hoots A Lot. Ghoulia was designed with the rest of the first wave, which is why she was in the original webisodes too! So it was so fun to see the fan reaction to her knowing she'd be coming along the next season!!! She released in spring of 2011 (which meant she was out right before Xmas 2010). Fun Fact: Ghoulia is named after one of my co-workers who helped work on the original Monster High Pitch: Julia Phelps! Another Fun Fact: Sir Hoots A Lot's original name was Brains, we were going to have that be the only word Ghoulia would say - like old times zombies - but that name was already trademarked so Sir Hoots A Lot was born! In the end it made Ghoulia a better character not saying any words. I do love her so much! I love her style, getting to put her in comic inspired clothes later on to continue to show geek shriek style was always so fun! The last pic is Ghoulia from the Monster High 6-pack where we re-released the Ghouls in their original looks! There will definitely be more Ghoulia showing up in future MHMondays!!

Garrett Sander: It's MHMonday! This Monday brings you the Maul Monsteristas 5-pack! Fun Fact: this set was originally supposed to be a Fraidie Hawkins 5-pack with two couples: Heath Burns & Abbey Bominable and Invisi Billy & Scarah Screams with Headless Headmistress Bloodgood as the chaperone! Maybe one day I'll be able to share those designs! So it was a last minute change to this concept! Just a few small changes: Spectra Vondergeist's boots tool ended up being at a different production plant so I switched them to the chain heels which were at the same plant as this set was made at. And for Draculaura just deleted the second pink strap so it became a one shoulder dress. Was so fun getting to use the Vampire Heart movie poster design from Frights, Camera, Action! for her dress! And finally we got a maxi dress for Gigi Grant! Clawdeen Wolf got her two tone hair with signature animal print down the front and Invisi Billy was painted so only his head was solid and the rest of his body was translucent! Thanks to @keen_rover for creating all the fangtastic prints based on my quick sketches! I also love this package! @spawntayneous did an amazing job on the design and Lauren Montgomery did the sketches for the poses of the characters captured their personalities clawsomely!

Garrett Sander: Happy MHMonday, ghouls and mansters! This week brings you Monster High's very own hybrid monster Neighthan Rot! Half zombie, half unicorn; all manster! Neighthan starred in Freaky Fusion where he and his hybrid friends started at Monster High. His design stayed pretty close to his original design. His sweatshirt became a baseball tee. With a graphic inspired by vintage anatomy drawings. His pants have a graphic "muscle fiber" print on one leg and his shoes lost the black. He was our first MH boy with long hair (and a rooted tail!). He was really fun to design. The zombie details on his body are one of my favorites! Subtle but really nice. We also toned down the black around his eyes to be more gray so he didn't look so sinister haha! His horn was originally black, but got lost in his hair so it was changed to blue, which makes it stand out nicely and I think worked out better! Seeing something in 3D always helps and makes you adjust things you didn't see in 2D. Fun Fact: the original movie idea had our ghouls going back to the 50s! But we wanted to take a look back at the beginnings of Monster High and get to meet Robecca's dad Hexiciah Steam!

Extra: I wanted to do a bold look on him, but also represent a rainbow of colors. I really liked the way the primary color palette popped against the black and made him feel unique amongst the rest of the cast!

Garrett Sander: Happy MHMonday everyone!! Since this outfit reappeared in Adventures of the Ghoul Squad I thought I'd share her original design from Boo York, Boo York and since you've seen a Catty Noir design before I am also including the original design for Seth Ptolemy! Fun Fact: in the very beginning of designing the Boo York, Boo York line Seth was supposed to be a doll! There were going to be two two-packs: Deuce and Cleo and Catty and Seth! Unfortunately the Catty and Seth set was dropped early on, we used the Catty design for a 3-pack, but Seth never got a doll. I really loved his design too. He was so fun to work on. But at least he got to come to unlife in the movie! I love this outfit on Catty! It’s pretty much exactly as it was designed! Some of the binding changes to stitch detail, but that usually happens when changing to doll scale. Her shattered pink holofoil jacket is my favorite piece!

Garrett Sander: Happy MHMonday, ghouls and mansters!! Here's Haunted Rochelle!! Designing the Monster High Haunted line was really fun! We went for a pastel color palette even making blacks grey to give the Haunted school and the ghost world its own look. Rochelle Goyle was super fun to work on, this was the first and only time I got to design for Rochelle (she was created by the ubertalented Rebecca Shipman!) She is pretty much the same as the original design, added some contrast stitching on the fleur de lis in light pink to make it stand out a bit more. Her skin also looked extra clawsomely for her ghostly version! Because she is made of stone we speckle her skin and making it translucent made it so you could see the "stone" specs floating inside her! Fun Fact: the bracelet Rochelle comes with (and she, Draculaura, Twyla and Clawdeen wear) was originally a part of the story. The ghouls wore the hourglass bracelets as the boogiesand would only keep them as ghosts until the sand ran out! The story changed somewhere along the way, but we were too far in production on the toy to change it. But it's still a cool accessory!!

Extra: We were always tasked with making the characters look new and different. The mask had been done on the ghost Create-A-Monster and we thought it looked cool and would be a way to signify that these were monsters changed to ghosts, not born ghosts if you will.

Retrieved from "https://monsterhigh.fandom.com/wiki/August_28,_2017_-_MHMonday?oldid=337172"
Community content is available under CC-BY-SA unless otherwise noted.