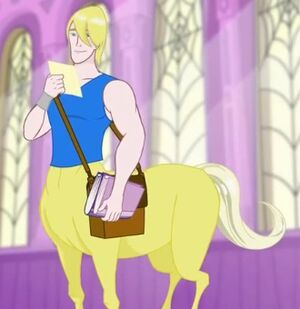 Archer is a white centaur who attends Monster High.

It isn't clear if Archer is aloof or unobservant, and there is a possibility that he may not be able to understand and speak English all that well. His one speaking role had him produce a horse's sound, suggesting that to be his primary language.

Archer is a white-skinned centaur, with short wavy-like blond hair that covers part of his eyes, blue eyes, and yellow horse hair. He also a creme-colored tail. He wears a blue A-shirt, a silver bracelet around his right arm, and a brown crossbody bag.

Due to his handsome appearance, Archer is very popular with the female students. He, however, only has eyes for Nightmare.

Retrieved from "https://monsterhigh.fandom.com/wiki/Archer?oldid=345936"
Community content is available under CC-BY-SA unless otherwise noted.