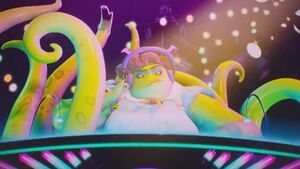 The aquatic lunch lady is a 2016-introduced and fiction-only character. She is an aquatic monster, possibly a cilophyte, and works as the lunch lady at Monster High. She's a harsh one and never so much as cracks a smile, but she's not antisocial. She enjoys a good party, especially when she can show off her qualities as a DJ, and she takes care to ensure the students' safety.

She is voiced by Jun Falkenstein.

Gruff and imposing, the lunch lady is not one for discussion regarding the menu. She cooks it and the only input the students can give is whether they'll eat it or not. They usually do, because while the lunch lady does not provide the most mouth-watering dishes, it's still nourishing food. She rarely loses her poker face and when she does, it's only to frown or smirk; she doesn't do happy faces. All the same, she is a nice person, just one that lets it speak from her actions instead of countenance or words. Welcome to Monster High

The lunch lady is a large, yellowish green, aquatic monster with at minimum thirteen tentacles, not counting her arms. Her stature and multiple limbs make it so that she doesn't move around as much as most people, because she can reach things easier with her tentacles. Her eyes are yellow and covered by a monobrow, while her hair is red and, when tucked away in a hairnet, held together with pins on the left in such a way that the look reminds of a sea urchin.

The lunch lady is the one who pulled Tash to safety when Draculaura and Moanica D'Kay went mano e mano and everyone else was preoccupied with their own battles. This gave Ari the courage to stand up to Moanica on her own. When the party resumed, the lunch lady provided the backup music for Ari's singing.

Not making a grand first impression what with crudely shoving mash onto the students' plates and disregarding their obvious disgust, the lunch lady gets to present herself in a better light when Draculaura and Frankie throw the Dance the Fright Away party. She volunteers as DJ and brings about a solid atmosphere until Moanica and her Zomboyz crash the party with an abducted Tash and threaten to turn her into another zombie. The Monster High population moves to stop them and the lunch lady does her share by personally protecting Tash. When the Zomboyz try to climb up her music installation, she turns up the volume to knock them off without so much as breaking a sweat. Welcome to Monster High

Even in the following months, the Zomboyz do little to win her favor. She is about to scold two of them when they cut in line at the creepeteria, but they are called away by Moanica before that is necessary. Electrified

Retrieved from "https://monsterhigh.fandom.com/wiki/Aquatic_lunch_lady?oldid=349580"
Community content is available under CC-BY-SA unless otherwise noted.