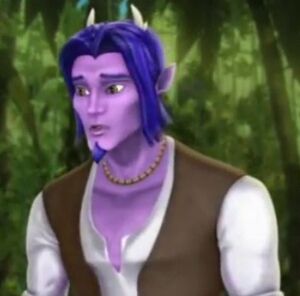 Andy Beast is a 2012-introduced and cartoon-only character. He is a unspecified type of monster and an unusual example of his kind to boot. Whenever he gets upset, he grows many times his size and loses much of his rationality. His parents were unable to provide him with a home due to his condition so they sent him away to isolation. Due to a shipwreck, he ended up on Skull Shores and spent a good portion of his life there, at a distance from the locals, before reintegrating with society and enrolling at Monster High. Andy has limited self-esteem because of his difficult childhood, but his first steps towards healing have been made. He is also a TV-special-only character as he does not appear in any webisodes.

In English, Andy is voiced by George Newbern. 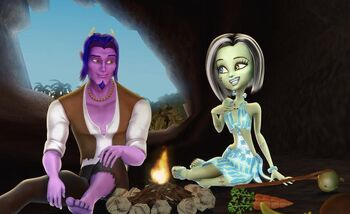 Due to a youth filled with disappointments and rejections, Andy has had trouble trusting others and may appear shy and ill-mannered. He also lives in constant fear of his beast side being unleashed, which he thinks it makes him a danger to others. Since befriending the Monster High students, he has began to gain confidence, but it's still a way to go before he'll have dealt with his insecurities.

Andy presumably is from around the 18th century and has been living alone on Skull Shores since that time. As a result, he is unfamiliar with modern day technology, and is easily freaked out by it.

As he normally looks, Andy possess yellow irises, light purple skin and dark purple hair. His ears are pointy and resemble a deer's. He also has white miniature antlers and sports a dark purple goatee.

As beast, Andy is some ten times his usual size, has dark purple skin, and is covered in fur. He sports a full beard. His irises are orange, while the rest of his eyes is yellow. His antlers are huge and purple. 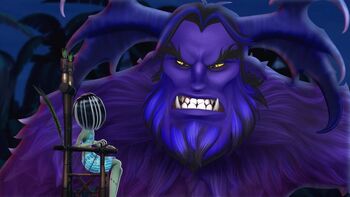 Andy doesn't seem to be based on one particular classic monster, but incorporates elements of several different ones.

Andy's role in his debut TV special is heavily based on King Kong (originally Kong), the titular character from the 1933 movie King Kong, who resides on the island known as Skull Island. King Kong is a giant ape that terrorizes the natives of Skull Island, but falls for the charms of a woman visiting the island, Ann Darrow. She comes to both fear the creature and sympathize with him, but neither does the creature good. King Kong is eventually captured and brought to New York, where he is put on display. Frustrated by severe maltreatment, King Kong breaks free and grabs Ann. With her in one hand, he climbs the Empire State Building to escape the crowds. At the top, he makes sure Ann remains safe, but he himself is killed by the gunfire from a squadron of military airplanes.

In Japan, King Kong was reimagined in 1962 as a kaiju.

Andy also shares a few characteristics with the Beast from the fairy tale Beauty and the Beast, though most come from the fact that the stories of King Kong and the Beast are already thematically similar. Nonetheless, Andy's change from handsome young man to ferocious beast is unique to the latter story. Also, the scene with Andy stuffing his mouth full in the Creepateria, appears inspired by Disney's 1991 movie adaption of the fairy tale.

Andy's design has a forest theme, due to his combined elvish appearance and deer-themed looks. Particularly in his beast form, Andy resembles European forest men such as the Green Man, and the wild man. He also resembles a Chort (the son of Chernobog) found in many Slavic folk tales due to his horned appearance, his transformation from handsome to ferocious, as well as his propensity to kidnap when transformed.

The transformation Andy undergoes due to stress and other negativity invokes the main trait of the Marvel superhero, Hulk. Like him, Andy's clothes tear apart during the change, but his pants magically fit both sizes.

Lastly, Andy's character takes from the freaks, deformed humans who were put on display in freak shows in Europe starting the early 17th century. Andy's unique ability to change into a beast, and perhaps his entire monster identity, is probably the result of a mutation he was born with, which makes him different from his kin.

Andy's background is hinted at through several things Andy said, but isn't clearcut. He says that he "grew up as the only monster in a normie town", suggesting but not confirming his family consists of humans. Taking into account that Andy's last name is Beast, the suggestion becomes more that his parents are monsters too and that Andy is an only child, therefore being the only monster growing up in his town. Andy does explicitly state, though, that his particular ability to change as a consequence of negative emotions is unique to him.

The way Andy's parents felt or feel about him isn't clear either. Andy says that the family moved several times in order to find a suitable environment for their son, where he wouldn't be made an outcast. But he also says that when they couldn't find one, they sent him far away.

Andy's dearest friend is an explorer who visited Skull Shores around the start of the 20th century. She was the first person he met outside his family that was not afraid of him and with whom he felt at ease. When she left, Andy created several statues of her to help him remember her and the feeling of acceptance.

At the start of the 21st century, Andy met Frankie Stein, who looked and acted a great deal like his 20th century friend. Andy and Frankie befriended each other quickly.

Andy may share a friendship with Kipling, who like him is a freak and whom at the same time as Andy learned that this didn't make him less of a person.

Andy isn't romantically involved with anyone, but his enrollment is met with enthusiasm by the female portion of the Monster High student body. Or as the Ghostly Gossip put it: "School ghouls just jazzed for jungle boy." But he also encountered a normie girl long time ago and she was exactly like Frankie, specifically the one who was more the 20th century and whom he built statues in honor of her.

He first appeared in "Escape From Skull Shores". Andy was the beast of Skull Shores. Frankie later in the movie awakens in an elaborate tree house made from old ship parts. To her surprise, a shy, handsome boy is with her. She asks who he is, then remembers the monster and tells him they should flee while it is gone. The boy answers that won't be necessary, as the beast and he are the same creature. He introduces himself as Andy, and explains that he is different. He was born some centuries ago with a particular affliction that causes him to change into a huge beast if he experiences hate, anger, or fear, whether his own or another's. Due to this, his family had to move often to escape mob retaliation, which only made the affliction worse because Andy didn't get a chance to learn to trust others. Eventually, he reached Skull Shores in search of a place to live in peace. That dream was shattered when the Tiki found out about him and began to fear him. Nonetheless, he stayed, having nowhere else to go anymore.

Frankie asks Andy about the statues on the island. Andy tells her about his friendship with a girl a long time ago, who was the only one he ever met who wasn't afraid of him. He made the statues after she left, so as to be reminded of her whenever he felt upset. Suddenly, the duo notices movement in the bushes and Andy charges in to attack, only to find the surprised trio of Clawdeen, Draculaura, and Cleo. Any joy about the reunion is squashed mere moments later, when Farnum is spotted. Frankie urges Andy to run since Farnum is only interested in him. Andy does so reluctantly, but doesn't make it far before he has to hide and subsequently overhears the entire exchange between the students and Farnum. Though Farnum initially has the upper hand, Abbey and Ghoulia make their entrance, backed up by the Tiki chief who orders the Tiki with Farnum to turn on him. Only mildly bothered, Farnum takes his special cane and makes a magnet appear, which pulls Frankie to him. Threatening to suck the electricity from her with his cane, Farnum shouts for the beast to appear. Andy is enraged and changes, but like the others finds he can't do anything but obey lest he risks Frankie's very life. He changes back and turns himself in. Farnum is delighted about the beast's dual nature and how that makes him much more manageable than he had thought the beast would be.

After some days, Headless Headmistress Bloodgood orders everyone to the auditorium for a speech about tolerance by a human guest speaker. While the man appears merely eccentric at first, realization hits when he starts calling the individual students "specimens" and "oddities". He appears particularly intent to torment Andy with his derogative words, leading to Bloodgood demanding he leave as his speech has nothing to do with tolerance. The man joyously explains he must have misspoken: he didn't mean to lecture about tolerance, but about intolerance. Pestering Andy further, he is slammed away by the boy, and finally reveals that he is Farnum.

Andy, pushed by the chaos, transforms and bursts through the roof, sending the other students and teachers fleeing for their lives as the ceiling comes down on them. Frankie stays and tries to calm Andy, but he picks her up and climbs one of Monster High's towers with her to escape the chaos. Farnum and Kipling show up on the bridge between the towers and Farnum convinces Andy that, just as with Kipling, a freak like him has nowhere else to turn to than to a man like Farnum. Though Frankie tells him not to listen, Andy does and agrees with Farnum's reasoning. Kipling, though, finally realizes he's been wrong to let Farnum's abuse crush his self-confidence. He takes off his hood, revealing his ears are deformed in the form of an elephant's, and picks up Farnum. Spotting one of the carnival stands not yet removed, (which contains a tar pit), he throws Farnum into it. During his fall, Farnum crosses paths with a flock of birds, causing him to end up not only tarred, but feathered too. Aghast about his own freaky look, Farnum runs off, only to be captured by a bunch of humans he probably had called himself to capture Andy.

As Andy, Frankie, and Kipling join the students below, Frankie tells Kipling to stay. While freed from Farnum's influence, Kipling isn't sure he'll be accepted until he spots two monster girls who have elephant ears too and clearly think he's a looker. The happy end seems to be gone with that when Headless Headmistress Bloodgood announces she has grave news. Due to the damages done to the school, Spring Break is extended with a week to get reparations done. As Headless Headmistress Bloodgood ends in an upbeat tone of voice, the students cheer. On recommendation by Abbey, the entire student body decides to enjoy the extra vacation on Skull Shores, much to the Tikis' delight too.

He made a cameo in "Friday Night Frights" as a fan in the crowd chanting "Monster High" after the girls beat The Vampires.

Retrieved from "https://monsterhigh.fandom.com/wiki/Andy_Beast?oldid=346054"
Community content is available under CC-BY-SA unless otherwise noted.