The American International Toy Fair, commonly refered to as simply Toy Fair, is a major annual event by the Toy Industry Association which offers toy companies a platform to show off their current and future products to peers and the press. The event takes place mid February in the Toy Center in New York City and is not open to the public.

Mattel is a regular at Toy Fair. The company first featured their Monster High line-up at Toy Fair 2011. Toy Fair 2010 was passed over for a debut at San Diego Comic-Con International in July. 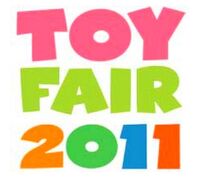 As far as Monster High went, Mattel's presentation was lackluster in 2011. Rather than the display providing insight into the franchise's plans for 2011, the Monster High setup was limited to pointing out the success of the line thus far. Only dolls released in 2010 were on display, and most merchandise surrounding them also was old news.[1] In fact, The Ghoul Next Door was the only Mattel product yet to be released that was present. The presentation held for the investors, customers, and media was a little more forward-focussed, mentioning upcoming releases such as the Ghoul Box and Where There's a Wolf, There's a Way, but equally it did not talk about future doll lines.

The "highlight" of the Monster High stand was the Gloom Beach line-up consisting of the first five dolls. This line had been out for about two months by then and had not been present at the stand during Comic-Con 2010. The other eight dolls on display comprised the 'Basic' line. These thirteen dolls were divided over two primary platforms enclosing the two books on display as well as a laptop that had the Monster High website open. The screen above showed little more than an animated version of the franchise's logo. On the left side, the dolls were flancked by a small stand with accessories from Claire's, while the dolls on the right were in the company of a mini-costume section. A separate Monster High stand was maintainted by Sakar Electronics and featured their entire licensed lineup for the franchise up until then and a little upcoming. 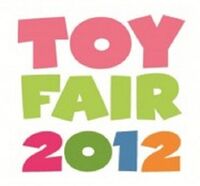 Mattel made up for 2011 with the 2012 Monster High stand, which was a lot more vibrant and filled than the previous one. Starting 2012 with Ghouls Rule, American International Toy Fair became Mattel's moment to introduce the line(s) related to the Fall TV special as well as the home video-disc version of the TV special, for which the senter stand is reserved. The other two dolls highlight that year were the announcements of the Design Lab subseries as part of the continuation of the Create-A-Monster line and of the 'Between Classes' line.

'Between Classes' received a special focus from the stand, even if its dolls were unassumingly spread out over a shelf on the left and mixed with other 'Signature' and debut dolls. Jackson, a long-awaited 'Signature' doll, was first shown at Toy Fair, while the three girls debuted as both dolls and characters. Only Venus had just before had a cameo in "Why Do Ghouls Fall in Love?". While Jackson, Venus, and Robecca were on display from day one, Rochelle's doll was stood in for by a silhouette of her profile art similar to the Ghoulia silhouette regularly used at San Diego Comic-Con. The silhouette was replaced with the doll on the 13th to coincide with the Freaky Fab 13 update of February. This kind of reveal was never repeated for Toy Fair.

The bigger lines along which Monster High would continue through 2012 were given during the Mattel Toy Fair Analyst Presentation, which line-up, the "Ghouls Rule" DVD and the other three specials, the fourth Monster High book, and the upcoming webisodes. Contrary to earlier claims in the November 2011 issue of Toynews, which stated 52 webisodes were planned, the presentation stated 30 were planned, confirming rising suspicions since "Uncommon Cold" that the webisode schedule had been changed from weekly to biweekly.

The left part of the Monster High stand consisted of three shelves with dolls and merchandise. The top shelf contained a core line mix of dolls already released (Abbey Bominable, Holt Hyde, Toralei Stripe, Cleo de Nile, Deuce Gorgon), dolls just released or soon to be released (Nefera de Nile, Howleen Wolf, Purrsephone, and Meowlody), and in the middle dolls not seen before (Venus McFlytrap, Robecca Steam). Rochelle Goyle was only represented by a shadowy cardboard cutout, leaving her exact appearance a mystery for her reveal on the 13th. The middle shelf contained the yet to be released Jackson Jekyll doll, Sweet 1600 C.A. Cupid and Frankie Stein, 'Basic' Clawdeen Wolf, and 'School's Out' Draculaura. Surrounding the dolls were the Back and Deader Than Ever book, the other three Monster High books, the Monster High Make Up Book, Freaky Streaky Locks, Pretty Scary Nail Polish, and a photo of the 'Basic' Frankie Stein and Clawdeen Wolf costumes. The bottom shelf hosted the core dolls of Operetta, Clawd Wolf, Lagoona Blue, Spectra Vondergeist and Ghoulia Yelps, and the Skull Shores doll of Gillington "Gil" Webber. Additionally, Monster High watches, a photo of a Monster High shirt, the Nintendo Wii version of Ghoul Spirit, the Drop Dead Diary, a hat, and a wallet were on display.

Right from the center was the yet to be released Design Lab playset on display, below a single shelf displaying the Create-A-Monster assortment. A line of unopened packages of the Vampire & Sea Monster starter pack and of the three add-on packs of the Insect, the Three-Eyed Ghoul, and the Skeleton stood in the back. In front of them stood two yet to be released assembled dolls, the cat girl and the vampire boy, and next to them the already released Skeleton, Dragon and Sea Monster. The right side of the shelf was reserved for two opened Lab add-on packs, one of a cat girl and the other of a horned monster.

Images of the Monster High playset were released, but the set itself was not on display. A later stand featured boxed dolls, including those for the upcoming Skultimate Roller Maze, Dot Dead Gorgeous, Dead Tired and 'Between Classes' lines. While the dolls were the final product, the boxes were prototypes, proven by such things as Operetta's Dot Dead Gorgeous doll featuring her basic art.

It showed the Heath/Abbey 2-pack, the 13 Wishes dolls, and many other Monster High-related things.

Retrieved from "https://monsterhigh.fandom.com/wiki/American_International_Toy_Fair?oldid=304641"
Community content is available under CC-BY-SA unless otherwise noted.