Alivia Stein is a 2017-introduced and all-around character. She made her first animated appearance in Adventures of the Ghoul Squad: Howliday Edition. She's the little sister (technically daughter) of Frankie Stein.

In English she is voiced by Karen Strassman.

Feeling left out for being an only child, Frankie decided to create a younger sister who would be just like her. She named this girl Alivia (“She’s alive...ia!”). Unfortunately, Alivia did not share Frankie’s interest in science and only cared about photography, much to Frankie’s disappointment. However, Frankie’s friends all got along with her.

Later, during the All Monsters Day parade, Alivia loses control of the float, since she was only a few hours old and couldn’t drive. The float was headed for the human town. Frankie manages to stop the float and save her “sister”. Alivia managed to take some great photos since she was created, and shares them with Frankie. Frankie learns that just because Alivia doesn’t love science, it doesn’t mean she doesn’t love her. She learns to accept Alivia as she is, and is happy to be her “sister”.

Alivia is a bit shorter than Frankie. Alivia has light-green or mint-colored skin, long, straight, black hair with white streaks tied in a ponytail, and stitches on her arms, hand, legs, and a smaller, stitched scar on her right cheek, as well as two small bolts on her head. She has mismatching eye colors, her right being a clear blue and the left a bright green. Her mouth is unusually small.

In "Adventures of the Ghoul Squad", she has fewer stitches and her hair is blue rather than black with white streaks. She also has on sharp sunglasses.

Alivia possesses most of the same abilities as other corpse simulacrums.

Since she is a newborn, she doesn’t have any friends other than her sister. She’s also a bit curious and naive, despite her intelligence. Alivia also has a pet bunny-mouse named Gigawatt. 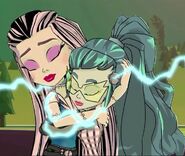 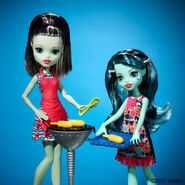 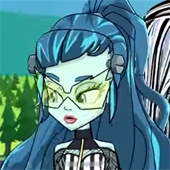 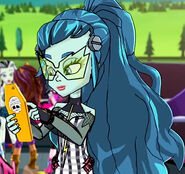 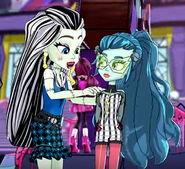 Add a photo to this gallery
Retrieved from "https://monsterhigh.fandom.com/wiki/Alivia_Stein?oldid=349483"
Community content is available under CC-BY-SA unless otherwise noted.