Abbey Bominable is a 2011/2017-introduced and all-around character. She is a yeti and a student at Monster High. She is an inhabitant of the Himalaya mountain range but has traveled to the Boonited States of Scaremerica to enroll at Monster High on request of Headless Headmistress Bloodgood, who is a family friend of the Bominables. Though not the only foreign student, Abbey has had a harder time adjusting to the new culture she is required to participate in than most. These days, she has created a reliable group of friends around her that make any awkward moments humorous rather than discouraging. Abbey is a proud and straightforward ghoul who doesn't readily spend words to bring her message more delicately. She's also very strong in terms of both physical abilities and psychokinetic ones and therefore intimidating, but although occasionally useful, she'd rather be known as simply a nice monster to hang out with.

In English, Abbey was originally voiced by Erin Fitzgerald. By "Adventures of the Ghoul Squad", and the reboot or Generation 2, she is now voiced by Cristina Milizia.

Abbey is known as the tough ghoul at Monster High. However, she is a victim of the culture clash between the Scaremerican way of life she is experiencing with her native Himalayan culture, and, though Abbey works hard to walk away from this, she will assume her latter ways are the correct ones and the ones that inspire most common sense. Due to this, Abbey was raised with short and strong words and is fierce, confident, intimidating, and often headstrong. She won't stand for nonsense and will not tolerate any rule-breaking unless it is for the greater good.

Her most common trait is her bluntness. Abbey doesn't see a reason for not telling the truth right away and sometimes fails to have a filter to rearrange her speech to suit situations. She will speak what she thinks from her heart's bottom no matter what and blame it on devotion to honesty. She also fails to understand the regular teenager games, like the anxiety of having a crush, and the latter is a big issue to her as the ritual of flirting and dating seems pointless to her.

Stoic at most times, when you allow her to open up to you, she will show a warm side of her, cuddly and cheerful even, in her own way, with a dry and dark sense of humor that reassures she tries hard to fit in and that her toughness isn't all of her. Abbey can be very easygoing once you make your presence known. Her coldness may be partially because English is her second language, and she has trouble telling when people are joking and when they are not, as well as common expressions or sayings.[1] Her references to her Himalayan home are quite present in her speech and hit or miss in awkward situations.

Abbey has light blue skin accentuated with a glittering effect and long, white hair with uneven streaks of pink, purple and blue mixed in, made to look like they start as pink and blue on the edges and mix in the middle as purple, and she has light purple eyes. She sometimes ties her hair into a ponytail. She has two small tusks protruding from her mouth and has large hands with sharp claws. Abbey is taller than most of the main cast, even in doll form. She always wears an ice crystal necklace to keep her direct environment at a suitable temperature for her. She also wears a white fur headband, a purple snowflake earring while the other is usually a blue spike earring similar to an icicle, fur wristbands, an off-the-shoulder tube crystalline dress, and knee-high boots, all made with yak fur, except her lilac leggings.[2]

Abbey has immense domain over the ice properties due to her Yeti heritage, and it is assumed she was born with these powers. Her powers can either be good or bad, depending on the situation. They are often handy; however, Abbey doesn't have full control over her powers, which causes chaos at times.

Abbey is the daughter of the Yeti, a legendary bear/human-like cryptid said to inhabit the Himalayan region of Nepal, India and Tibet. Stories of the Yeti first emerged as a facet of Western popular culture in the 19th century.

The scientific community generally regards the Yeti as a legend, given the lack of conclusive evidence, yet it remains one of the most famous creatures of cryptozoology. The Yeti may be considered a sort of parallel to the Bigfoot of North America. The appellation "Abominable Snowman" was coined in 1921, the same year Lieutenant-Colonel Charles Howard-Bury led the joint Alpine Club and Royal Geographical Society "Everest Reconnaissance Expedition," which he chronicled in Mount Everest The Reconnaissance, 1921. In the book, Howard-Bury includes an account of crossing the "Lhakpa-la" at 21,000 ft (6,400 m) where he found footprints that he believed "were probably caused by a large 'loping' grey wolf, which in the soft snow formed double tracks rather like those of a bare-footed man". He adds that his Sherpa guides "at once volunteered that the tracks must be that of 'The Wild Man of the Snows', to which they gave the name 'metoh-kangmi'". "Metoh" translates as "man-bear" and "Kang-mi" translates as "snowman".

Abbey is the daughter of the Yeti, also known as "The Abominable Snowman". Presumably, both of her parents are Yetis.

Abbey and Marisol Coxi are second cousins, which suggests that the Maricoxi and the Yeti are cousins, which unites the Bominable/Coxi family relationships, branching Abbey's family away from the Bominables. Additionally, she has a great uncle named Frostovitch, who suffers from weak bones Fright On!, a cousin named Blitnichik From Fear to Eternity and a grandmother yeti. Home Ick notebook

In her I Heart Fashion description, Abbey refers to herself as the youngest in her family. Whether this means she has older siblings or, in case family units are larger in her village, older cousins is unclear.

According to Abbey's profile, her best friends are Frankie Stein and Lagoona Blue. This is because out of all of Monster High's student body, they have been the ones helping her get accustomed to her new environment.[3] Headless Headmistress Bloodgood is a good family friend, and that it was her idea for Abbey to attend Monster High. Abbey stays with her during the school weeks so that she will not have to constantly trek back up and down the mountain. She also seems to be friends with Howleen because in her diary, she defends her when Manny Taur was bullying her. Abbey Bominable's School's Out diary.

She might be friends with Ricky since she knew that he was in the freezer. No Place Like Nome

Due to her somewhat cold nature, Abbey tends to make some foes, even when she means well. In fact, her relationship with Frankie Stein didn't start perfectly Abominable Impression. Either way, Abbey has made a list of animosities around Monster High, including the wereacat trio, Toralei Stripe, Meowlody and Purrsephone, and C.A. Cupid before her exchange. This was mostly due to their opposite personalities and the way each looks at the matter of love, Cupid's subjectiveness versus Abbey's objective ways.Why Do Ghouls Fall in Love? though their issues might have been fixed. The Ghoulest Season

Abbey's pet is a baby woolly mammoth named Shiver. Shiver is female, according to her bio and stats.

Abbey does not have a boyfriend. However, in her School's Out diary, she writes about Heath Burns hitting on her. She states that he is "annoying... but scary cute", and tries to ignore him. She would prefer to be asked on a date as opposed to flirtation.

However, in Ghouls Rule, the two seem much closer. When Abbey rescues him in the beginning from a pumpkin attack and saves him from being arrested while running away from the normie village, throughout the rest of the film, he tries to make it up to her. By the end of it all, the two end up dancing together at the party.

Also, in A Perfect Match, Heath tries nonstop to get Abbey to ask him to the dance. Despite her friends' protests, it seems that Abbey asks him either way. As to why she asked him is revealed at the end, when she told Cleo, "He makes me laugh."

In Scaris: City of Frights, while Heath thought nobody missed him, Abbey stated that she missed him a little, making him happy and starts to hit on her. 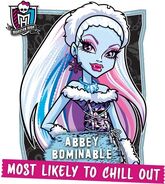 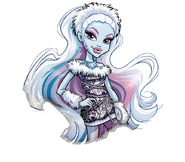 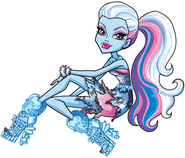 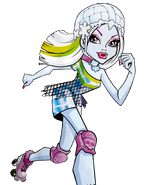 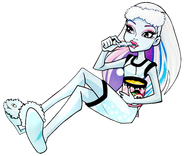 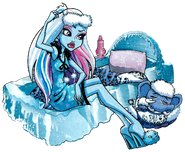 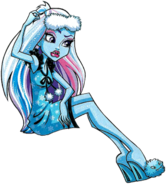 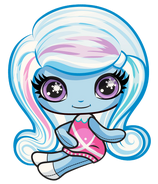 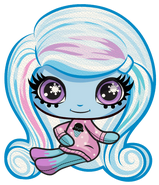 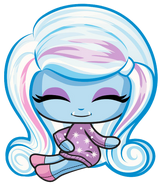 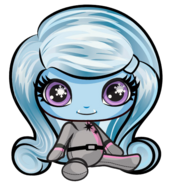 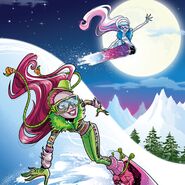